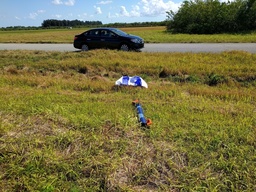 SRA Launch Special For Me - Thanks a million

If you open in excel, velocity is 10 frames behind (0.5 seconds) and you should adjust accordingly. To find deployment, seconds column value is 34.806. Deployment was forced by value in column AltitudeMSLGPS.

Main @ apogee due to early deployment.

Launch control system super fickle, but we were able to get both rockets launched.

I'll get that cleaned up now that the overall concept is proven.

Deployment of drogue occurred when the rocket was ascending 187 miles per hour. Tim, you heard me, from watching the video, I said I thought it deployed at what looked like 200mph!!!

I do two independent checks on altitude. Up until today, I've not had a problem with these two techniques.

The second check failed, for the first time. I will no longer use it. Instead I'll use G data as a second check instead erroring to caution. G data for deployment is very predictable.

The first is based off of barometer data, and pretty much works like any barometer based altimeter. For this launch, the code & data was rock solid as always.

Failed Check that will be Replaced to using Gs:

For this launch and previous launches, the second was based off of GPS data. I did this because the GPS ALWAYS lags, so it is a good delayed backup. GPS always gives me vertical accuracy (meters+-), so I always add the uncertainty of both values to the CURRENT value. That way, it errors with current value artificially inflated. That way, it's a great backup, because IF it shows descent, I know for a fact it is descending. I had a lock of 11 satellites.

Next GPS Read Altitude: -23 meters with a vertical accuracy of +-204 meters.

Using my formula, Is 3282(previous read) greater than -23+19+204? Yes, it is really descending FAST deploy! Code is actually more complex to insure values, but keeping it simple for describing.

It gave that bogus reading (altitude -23meters) for 7 seconds of reads.

The massive two months of changes Insane Rockets App in the rocket code-base I believe are now proven.

For now I'll just disable the GPS check before adding Gs code, it will dual deploy like a standard barometer based tracker for a release or two in the app store.

Over the next few days I'll scour the data more in depth to confirm all telemetry, battery conservation, heat conservation, and Android 8.1 compatibility changes are working correctly. I'll then release.