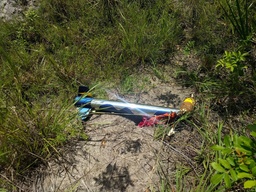 Unfortunately, I have not had any time to work on the video for this spectacular flight. I hope to process the video soon.

Lack of wind and beautiful atmospheric conditions with storms in the distance made for an ideal launch and visual aesthetic.

Launcher and dual deployment worked nominally. For the first time this year, no new code was being tested. While I will be doing some additional tweaking of the launcher code at some point, I have high confidence in what I have built and it's reliability.

Until more proven, here is my checklist:

All of this is performed after rocket and onboard Insane Rockets App is setup, but before the rocket is closed.

On next launch, I hope to test a new bluetooth arduino module I am working on. This module will allow more freedom of location of phone verses where I have deployment circuitry. In the future, this module also gives flexibility to control servos too.