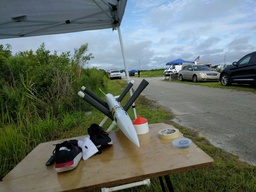 This launch performed very well but not perfect. Drogue deployed at apogee. Main deployed at its designated altitude (video confirms this & it looked like the ideal powder amount). Rocket was ready to fly again.

What troubled me is that the main flight deployment computer lost power twice during the launch. Tonight, I tracked it down to a faulty battery connector by performing a HEAVY shake test over and over while holding various parts in place with my hand to acting as a shock absorber on various sections. This isolated it to either the power switch or battery. Shaking both independently, I found the connector to be the failure point. Specifically, the compression area where the wires sleeve to the contacts inside the connector leading to an open circuit. In addition, I am not happy with the gauge of wire they used. Trying to find high gauge reliable connectors is not easy using the search engines.

While the backup flight computer did not exhibit any signs of this problem, it is utilizing the same battery connector. To be safe, the connector on the backup computer will be replaced as well.

Once I get the new connectors, I'll perform a heavy shake test again after rebuild and look for sudden voltage drops on both primary and backup computer. I'll then shake test the whole thing while doing a full simulation of deployment with lights (and measure voltage levels to deployment circuit) attached instead of ematches.

It was a fun motor, great launch, and a good day out there. I hope to be back next month.