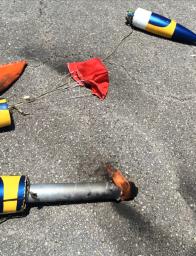 Update: "It looks like the liner failed at the forward closure / liner interface. This is most likely due to a weak spot in the liner. We have taken action to improve the quality of these parts (which are not made by CTI, as one of the few parts)."

May 2nd, I went to LaBelle, near Fort Myers to launch the EZI-65 using an L265. Predicted Altitude was a smidgen over 12k.It was forecasted to be much less windy, it was REALLY windy - like near 20 MPH so I held off launching until around noon.The wind calmed and I was ready to go.Five... Four... Three... Two... One... Liftoff, looked AWESOME!!!! OMG SO COOL, lots of power, direct straight up flight. Then something drastic happened @ 646 feet. At first, I didn't know if I stressed the poor frame out on the glassed EZI and it failed or if I had motor failure.What happened next explained everything. The motor re-ignited and started pumping major amounts of POWER out of a side hole near the top of the case - Motor failure, not build failure! This caused my rocket to come down, spiralling like one of those Massive Spinning Wheel rockets - but instead of going up, it was coming down.The force of the CATO blew up so hard, it blew the entire outer shell of the main airframe (where the motor mount ended) off the rocket. It also fractured the AV bay. Oh yeah, it CATOED near the main chute - so the main chute got RIPPED from every line. (they found it, amazingly enough) in the thick grass. Even if the chute had held together, the airframe was gone... so it didn't matter I suppose.All my pyro, even with all that hell, went off PERFECTLY, not that it helped it when it spiraled with high speed crashing directly into the roadway close to the launchpad. Motor was still belching fire and spewing stuff everywhere long after it was on the ground making doughnut burns in the roadway.HOWEVER: