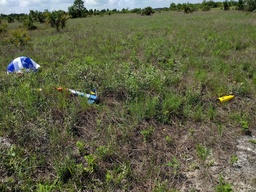 Thanks Tim for the ground zero video below.

New Radio Location:
While assembling, I noticed I have a short in my radio wire as transmission was intermittent. I used a ton of masking tape to try to hold the wires in the position and that seemed to keep the short at bay. I didn't think I would get broadcast during the flight. Prior to next flight I'll get new connection wires.
Luckily, transmission from the phone via bluetooth to the GRMS radio in the nose worked perfectly. The new nosecone configuration for the radio works great.
Dual Deployment:
This flight proved that the code for dual deployment is working properly. More flights are necessary to reinforce findings and, if necessary, fine tune code.
Internal Saving as Binary:
I rewrote all of the logic for saving files locally within the phone. It is now stored internally in a binary format to reduce cpu usage and make the code, long term, less error prone.

Once the flight completes, a final file is written in standard CSV, that way I don't have to support two external file formats, so the binary is only used during the flight.

In any event, when I rewrote all the logic, I missed a single variable, for record. You'll notice it seems to toggle between 1 and 0 during the entire flight. This is now corrected. Not bad considering a full rewrite.

I think a few more flights should flush all problems with the above code and it will be ready to release as a new version of Insane Rockets.

Stage Logic:
I'm glad I threw this test in at the last second. I knew the code wasn't ready but figured a real flight would help. Thanks to this test, I have uncovered an unexpected timing bug and a deceleration tilt issue that need to be addressed before this code is ready for prime time. I don't think I'll have time to correct either before the next launch, work is keeping me busy.
Summary:
This flight felt like my first high powered flight. I only slept a few hours the night before. Careful assembly in the 92 degree heat to insure everything was right was not easy. My hands were pouring in sweat as I was attempting to put shear pins in. I should have put my quickshade up, it made the phone run hot as well as the rocket was not in the shade. I was full of nerves as there was 4 months of additional code in place since my last launch.
Dual deployment worked beautifully, callouts on the radio were awesome. No wind, the brush fire, the flight, Tim's high altitude flights, and the LaBelle group made for a great time.